What Will Solar Power do for Property Values? 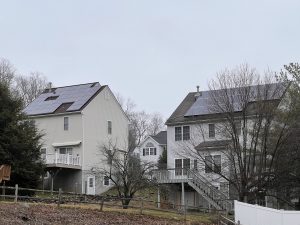 I got a question from a client about the effect that installing solar panels might have on their home’s value. It’s a good question, actually. Years ago when hurricanes knocked out power in our area for more than a week, I opined that backup generators would become the new status symbol. While I wasn’t wrong, green initiatives are gaining momentum and NAR even has a Green Housing certification for agents.

I plan on getting solar power in the near future. I see panels everywhere I go. I’m more interested in saving on my bills and not burning fossil fuels, but it is a good question- will solar panels increase value?

In all candor, this is not something I can speak to clearly on my own- the data is not too plentiful. Of the thousands of homes sold in Westchester in the last year, only a few dozen had solar. I can see why; the technology is relatively new and most people who install solar do so because they aren’t going anywhere anytime soon. So, there really isn’t a statistically significant number locally to go by.

That doesn’t help me answer the client’s question, so I did a little snooping around, and Zillow released a study in 2019 that confirmed that solar raises value by 4.1%. Zillow has way more data to crunch than I do, so there’s you’re answer based on their study. This is hard data and not an algorithm attempting to estimate value sight unseen, so I think the findings are reliable.

As I shared with my client:

My take is that there is no downside, leased or owned. There is no evidence I’ve ever found that said it harmed value. I think as time goes by more data will confirm Zillow’s finding.

I see more and more homes converting, and I’m planning on installing panels later this year so the trend is positive.

Younger buyers also prefer more green solutions and millennials comprise the bulk of the forecast of buyers in the coming years.

And I’ll do so myself in the next year.