Power 20 at the Stairs

For almost 30 years, a small framed Sport Graphics picture has hung on my wall. The image is that of a 4 man rowing shell going down the race course of the Schuylkill River in Philadelphia at the 1988 Dad Vail 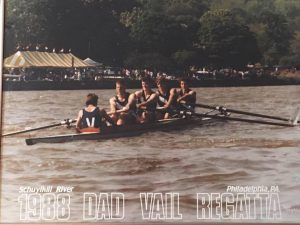 Regatta, which was the national race for smaller programs. That was my boat. It was a fast crew, one of the fastest in the nation as it turned out, and I’ll get to that a bit later.

My older brother had been a coxswain for the Cornell Lightweight crew in the class of 1980 and his boat was amazing. They beat Harvard in a dual race for the first time in 20 years, placed first in the Head of the Charles regatta, and would have raced at Henley in England were it not for an unfortunate washout at the 1980 Easter Sprints. These races are just names to a person unfamiliar with the sport, but to those in the know they are among the Mt Rushmore events of rowing. Following in my brother’s footsteps, I went out for the rowing team my freshman year at Villanova. Unlike Cornell, however, ‘Nova rowing was a modest club sport with limited resources. By the end of my sophomore year I seriously considered quitting and focusing my attention on researching the consumption of alcohol and chasing girls. I didn’t suffer from a lack of focus- rather, a lack of winning. I could stomach some losing but a schism had developed between the athletes and the men’s coach, and it seemed unlikely that we could win under his watch. I spent that summer with my brother in Austin, Texas, rowing for fun and thinking that I might not return to the team.

All that changed when I returned to campus my junior year in 1987. Jon was out; Jack was in. Jack St Clair had been named our new coach, and for those familiar with the Philadelphia rowing scene, it was like hearing that the Yankees had signed Reggie Jackson. Jack had competed on the international level and made his name for well over a decade prior to becoming our coach. I eagerly returned to the team but the season didn’t start out easily. Jack was a fiery, passionate guy with high standards and he wanted to turn around a beleaguered squad that had never tasted real victory. Coaching rowing isn’t easy- you are outdoors, often cold or freezing, and giving directions through a megaphone while riding in a small boat by your charges. Jack broke a few megaphones in frustration. As great as he was, he couldn’t row for us.

The fall season came and went, as did winter training (indoors but brutal), and the spring dual race season began with little fanfare. Most programs have several 8-man boats, but our heavyweight program was one 4 man boat plus the coxswain (me). One of our very first races was at Princeton, and they humiliated us. After the race, Jack’s skiff came along our side and, instead of offering words of encouragement or even scolding, he dispassionately gave us a workout to complete.

We had just finished a race! And now we had to have a practice drill?! Did you ever see a team of any sport do that? I never did.

But this was Jack St Clair giving the orders,and as tired as the guys were, we completed the practice, loaded the shells on the trailer, and returned to Boathouse Row.  Not long after, we lost to the University of Rochester in a dual race. 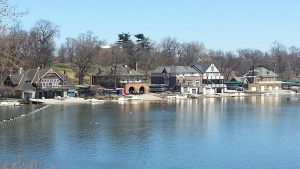 Before I go on, I have to describe the Schuylkill River race course in Philadelphia. Most rivers and lakes have sandy or rocky shores- not much variation. The Schuylkill was different. It was more like a cathedral of rowing, a Roman Colosseum of crew if you will. Much of the course is an ornate wall, with monuments (one is to Jack Kelly, a great Olympian and father of Grace Kelly) and statues along the way, and at the bottom is the famous Boathouse Row in the shadows of the Philadelphia Museum of Art. It’s like competing inside a mammoth movie set.

Before the spring season had gotten too old, Jack instructed me to call a power 20 at the stairs near the Canoe Club, at that time part of that ornate wall near the Temple University boathouse about midway between the 1000 meter (halfway) mark and the 500 meter mark. A power stroke is an acceleration of sorts, but it comes at a cost. There is no stroke an oarsman takes that is less than 100% effort, so it is difficult to explain a power 10 or 20. Rowing is an anaerobic sport, and I could best describe it as a set of strokes where the athlete goes further into oxygen debt. It was a counter-intuitive move, one that would tax the guys and possibly have them lose their edge in the final 500 meters of the race. I don’t recall who we were racing, but the move completely caught our opponent off guard. We felt it. “It” is difficult to describe, but it was as if we clicked. The boat felt faster. We leveled up. Whatever nomenclature you want to use, I could have dropped an anchor and we wouldn’t have given up that lead.

The power 20 at the stairs worked.

It reflected in our practices, our drills,and how we took instructions from the coach.

Throughout that Spring season, on our home course or at the closest approximation of such on other courses, we took that power 20 at the stairs (It worked so well that I whispered it so we didn’t give it away to the opponents), and it worked every time. We just kept getting better and faster every week. We didn’t come in first every race as I recall-we lost to the University of Rochester a second time, but it was a far closer race- but we set a goal to make the finals and win at the Dad Vail Regatta that May on the Schuylkill. Like track and field, rowing has heats, and we ended up beating everyone we had lost to earlier in the season to qualify for the finals, including the University of Rochester, which was incredibly gratifying. The finals were the fastest six heavyweight fours in the country among small and medium programs, and we faced awesome competition. The race was a photo finish for the Bronze 3rd place medal, which we lost by a few hundredths of a second. It was a bitter pill to swallow, as we had graduated two guys whom I wanted to send off with some hardware.

I spent the next summer before senior year rowing. I wanted to win more in my senior year. Unfortunately, Jack put me into the lightweight 8 that year, which performed with merit, but didn’t make the Dad Vail finals. There was no magic that season, and while the comparison to the lame team my sophomore year that had almost driven me to quitting was so incredible that it was absurd, I carried that disappointment for years. I respected Jack’s decision, because his focus was on the overall program and not my personal goal. But it still stung. One thing that helped me cope was the movie Field of Dreams, which I saw shortly after graduation. The character Archie “Moonlight” Graham said it best:

You know we just don’t recognize the most significant moments of our lives while they’re happening. Back then I thought, well, there’ll be other days. I didn’t realize that 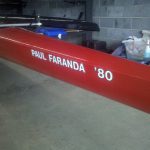 that was the only day.

I had my moment in the sun at the 1988 Dad Vail, and 1989 came and went with no championship or medal. My brother had a similar regret, but his was at a far higher caliber of competition. He cherished the experience, and when he died at age 47, his crewmates dedicated a racing shell in his name to the Cornell program. I valued my experience every bit as much. Tim O’Connor who rowed in the bow of the 1988 crew, ran into me at an event years after we both graduated, and he grinned and asked me what it was like to be in a boat that got faster every week. It was a rhetorical question- I haven’t seen Tim in 20 years but if I did the time would disappear-as would a few beers.

This past weekend, Melissa and I went back to campus to a gathering to honor Jack after his recent retirement from coaching. He had built the program to a Dad Vail champion, and his crews competed at the IRA 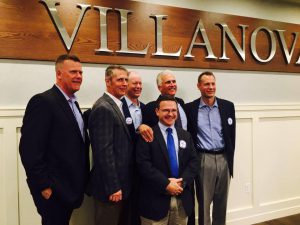 and Henley Regattas. In the mid 90’s he switched to coaching the womens’ crew, and they had become a varsity sport. 3 of my 4 teammates from that 1988 boat also attended, and I was 20 again for a few hours. It’s difficult to describe that kind of bliss.

The University president spoke, as did the athletic director among others, and Jack deserved every accolade given that night. One tribute really struck me. One of my mates and a truly great oarsmen that Jack coached gave a toast that explained how Jack had opened his home to him and given him some summer work in between rowing workouts. He explained that his parents had an acrimonious split (I recall this) but what he saw in Jack that summer was how to be a good father, husband and man. What a profoundly important example for a young man to see.
Wow.
The room was filled with people whose lives the coach had touched, all of whom had a story of the difference he had made as their coach. There were some pretty spectacular achievers present, so that is saying an awful lot.

Everyone has their own version of a power 20 at the stairs that Jack gave them. I have built my business and brand with almost that very philosophy- to find a vulnerability, a counter-intuitive means to advance on my competition. That ethos sustained my independent firm through the worst housing crisis since the Great Depression despite the economy and brutal competition. But this isn’t about me, it’s about Jack St Clair, and it would be trite to reduce his gift to a mere strategy. I’ve broken a few megaphones along the way myself because, like Jack, it starts with wanting to win very, very badly. Jack believed that we could put on the jets at the stairs without losing our wind at the end of the race. Without that confidence, we would have gone nowhere. Culture always beats strategy, and Jack made Villanova a winner after many years of losing. Without him, there are no championships, and, worse, countless dozens of athletes would not have benefited from him. So I tip my cap (and glass) to Jack St Clair, a great coach, a winner, a maker of champions, but above all, a fine human being. I will forever be grateful for his contribution. 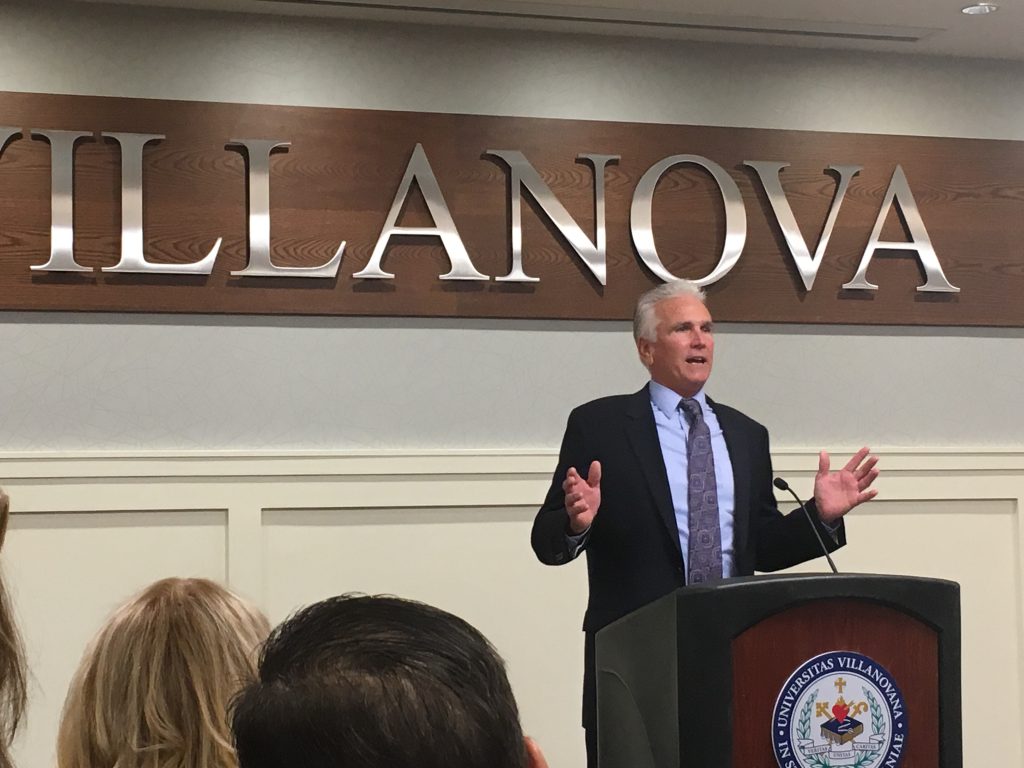