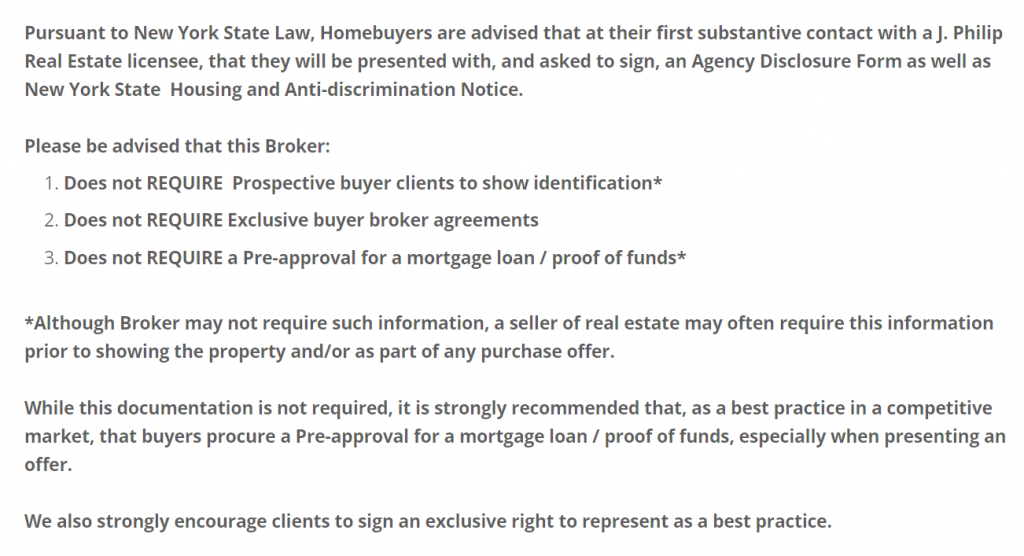 First, some background: In late 2019, Long Island Newsday published the shocking results of an investigation where reporters of different ethnicities and races went undercover as prospective homebuyers and the different ways they were treated by the real estate agents they engaged. Long Island Divided made national news and reverberated across the industry as professionals were faced with hours of footage showing how white prospects were treated differently than their counterparts of color. It was awful to watch. White home buyers were treated far more favorably. Among the hurdles placed before black and Hispanic buyers were requirements for being pre-approved before seeing homes, being asked to sign a representation contract before seeing properties, and being asked to produce ID.

These things are not bad in and of themselves; a pre approval and exclusive right to represent are considered “best practices” before home shopping.  The problem was that white home buyers seldom had these hoops to jump through. There was plenty of cringeworthy, disparate, and biased treatment that seemed awfully coincidentally tied to the race of the buyers, and the data reported on how white home buyers were treated compared to other races was damning. Worse, some of the companies reacted very poorly to the report.

In response, the state government passed a new law mandating an additional fair housing disclosure to be signed by all prospects at first substantive contact so the consumer would know their rights, and for the disclosure to be posted prominently in all real estate offices. No one was under the illusion that a piece of paper would change peoples’ hearts, but it did appear to make a difference in informing consumers of their rights.

But that wasn’t the end of it. This year, Albany passed another law requiring brokerages to publicly disclose a uniform standard operating procedure as on whether or not the brokerage would require a pre approval, exclusive representation contract, and showing identification before serving the consumer.  On the face of it to the layperson that might seem reasonable. However, real estate agents are independent contractors with different business models. Asking for a pre approval up front is baked into the practices of many of our agents. Others are willing to meet up without a pre approval or proof of funds up front, and so long as the agent themselves are consistent, no bias could be explicated. It made sense (and is still the way it is in the other 49 states), that so long as an agent who would, for example, tell a $1000 rental prospect that rentals weren’t their specialty, that they wouldn’t suddenly be open to rentals with a $10,000 budget consumer. The law doesn’t see dollar amount in that example, it just saw bias that would unfairly affect folks with lower economic means, more likely to be minorities.

The new law, however, expands the bias to the entire brokerage without any consideration for details like agent safety, business models, or other circumstances. This made brokerages face difficult choices. If a company chose to not require pre approvals, for example, then it would be an infraction for an individual agent to practice a business model to require them. The converse would be the issue for brokerages that might require ID, financials, or an exclusive contract. The conundrum for brokerages with more than a handful of agents is the big tents so many companies have with the business practices of their independent contractors. Now, to the state’s credit, they aren’t making a judgement about requiring or not requiring these things in and of themselves; they want consistency. But making the consistency brokerage wide rather than for individual practices could be construed as overreach.

Some agents, for example require a pre approval ahead of time to verify the identity of the consumer for safety purposes. This is understandable. Other agents might not be concerned about safety so much. And circumstances can change. We meet strangers alone in empty houses for a living many times. Other times we meet people in crowded setting like a high trafficked apartment complex. This has nothing to do with the ethnicity or race of the consumer.

To complicate matters, these rules go out the window when a homes seller requires ID or a pre approval. Those preferences must be obliged regardless of company policy.

I predicted that larger firms would not require any of the three up front as a condition of service and smaller firms might be more likely. Since the operating procedures have to be on the company websites, I was able to confirm that I was correct.

I’ll also predict that more homeowners will be coached to require pre approvals so the brokerage community could be off the hook to a degree. Time will tell on that. The law may change after feedback from the industry to legislators, but it is also an incredibly sensitive thing to debate- no one wants to be the brand that might have appearance of being against any fair housing initiative.

This brand has chosen to not make ID, exclusive contracts, or pre approvals a requirement, as the graphic above says. We have a number of agents who have historically required them as a condition of service, and we are training our agents to be consistent in being sensitive to the different consumer preferences and refer a prospective client to a colleague in the firm when in the past they might have felt they weren’t a professional match. This will surely evolve, but I’ll agree with Albany about one thing: if we have to make a choice between the unbiased experience of the consumer and the convenience of the professional, the consumer must get the nod.