On Spencer Rascoff Stepping Down as Zillow CEO

Yesterday, the housing world was rocked when Zillow announced that their CEO of 10 years, Spencer Rascoff, would be stepping aside and that co-founder and original CEO Rich Barton would be taking over again. I, of course, have thoughts; so does the rest of the housing world, and you can divide them between those who hate or distrust Zillow who will spike their collective footballs, and those who either like Zillow or are agnostic who will wake up, shave, eat a well balanced breakfast, and go to work.

I’m in a rare category as some know, because since 2012 I have been a charter member of Zillow’s original Agent Advisory Board as well as its latest iteration, the Premier Agent Advisory Board. I’ve been to more Zillow events and meetings than I can count, from 3000 person conferences in Las Vegas to a hotel meeting room in Rochester NY with a few dozen agents, sometimes as a speaker or panelist. I have been to Zillow Headquarters many times and been in oodles of closed door meetings. I was among a few folks on the dais when they had their first NASDAQ bell ringing after they went public. I have done business with them since 2007 (I was the first Westchester brokerage to syndicate my listings then) and am an early adopter. One blog I wrote about Zillow was the catalyst for meeting my fiancée. More on that another time.

Many licencees have hated Zillow for years because they disrupted things; some clearly for good (I would say most) and some that we’ve had to adapt to. Zillow was among the first national platforms to actually disclose property addresses, price history, time on market, and many other things that beforehand were hidden behind the curtain of the MLS. In an industry where being gatekeeper of information was at one time a huge value proposition (or so we thought), that’s really moving the cheese. The Zestimate was something few agents, myself included, liked very much, but it was also their secret sauce and I understood why they never compromised on it. Other agents hate them because they are a for profit business and won’t give them leads (or, should I say all the leads) on their own listings for free.

Me? I hated newspapers because I knew a $400 classified ad would be in 99.9% of the recycling bins by the next day, whereas my online content was forever.

There are the conspiracy theorists who say that Zillow wants to put us out of business, wants to become a national MLS, or will flip a switch and become their own brokerage soon. Zillow cannot change the wall tile in their bathrooms without some keyboard warrior who claims that the move is just a precursor to some sinister project they made up in their own little head. I’ve heard it all, and Spencer has been one of the top three targets of the collective ire for a decade. He’s always handled it with class.

I am far from Spencer’s golfing buddy, but we’ve know each other since around 2010 when I met him at an Active Rain event and I have watched and interacted with him extensively over the years. I’ve watched him go from a guy in “startup alley” to a virtual household name in business circles with more appearances on national programs than you could count. He hasn’t changed toward me one bit- always friendly, always interested- and professionally, curious as to what he can learn and how to use that to move the industry forward. My first substantive interaction with Spencer was when I wrote him an email in 2012 with some suggestions, as at that time Zillow was a relative newcomer to the national housing discussion, and it was already loud in the room. I had no standing other than barely knowing him from a few conference niceties and tertiary rubbing elbows on social media. I was a tiny broker on the east coast, and he was the CEO of a Seattle tech company that was making waves. I would have understood if he never responded. 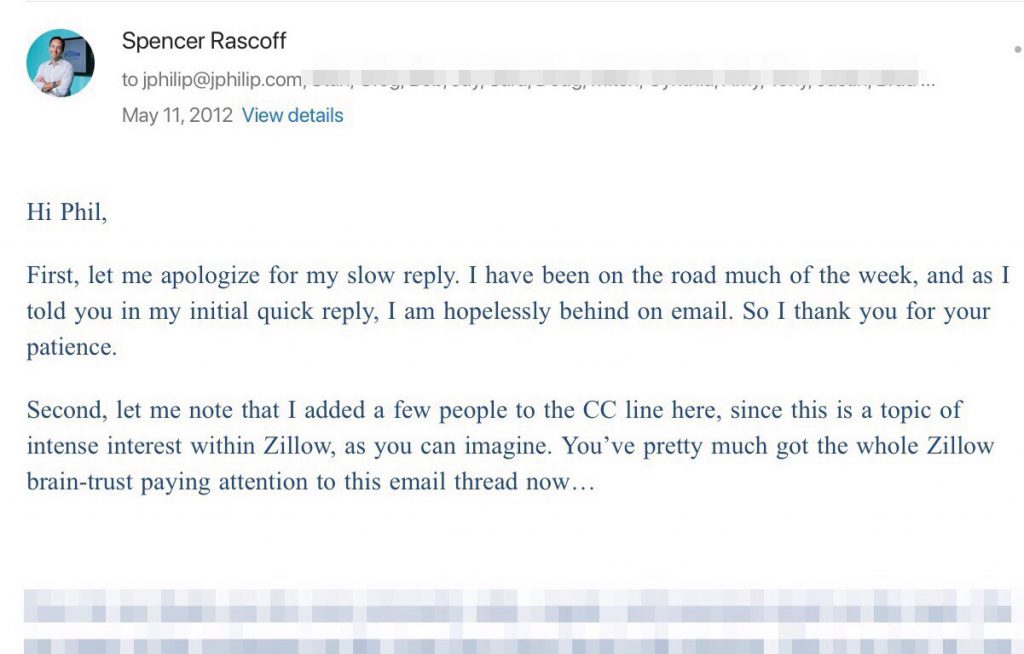 Spencer wrote me 3 emails over the next 5 days. The first two were apologies for his crazy schedule and a promise to respond in more detail. The third was a detailed response, copying in, in his words, pretty much the entire Zillow brain trust. Within a few weeks the Agent Advisory Board was formed, and I began a journey that among many other things, introduced me to the finest real estate minds in the world. My time invested in Zillow’s different advisory boards gave me a deep appreciation of the company’s culture, the integrity and character of their leadership, and the Big Picture of their corporate mission (spoiler alert: it isn’t to put agents out of business).

This isn’t to say that my exposure to Zillow’s leadership and various other industry colleagues had me sitting there with stars in my eyes because I was with the cool kids. Many meetings had tense, difficult and, shall we say, spirited discussions on what Zillow wanted to do and what the agents they were speaking to wanted. But that’s kind of the point- from the beginning, they were genuinely curious as to what agents wanted and needed, what they could do to help, and what common ground we could build upon. We weren’t being “sold.” They stated openly that they were a tech firm and not a real estate firm, and that they wanted to learn from us. Few companies I have ever dealt with asked as much input from their customers, and that comes in large part from Mr. Rascoff himself. Zillow employees have rated the place as a phenomenal company to work for years. That also speaks volumes.

When Spencer sold a property a few years ago, many in the industry teased him about the disparity between the Zestimate value of the listing, and what it actually sold for, but what that told me was that he was man enough to walk his talk. I suppose he could have pushed a few buttons to influence his own home’s number and make the Zestimate look super-accurate but he had the honor to let the facts be and deal with it. Moreover, the Zestimate created tons of copycat automated valuation models that most of his critics actually now use, including Realtor.com. Every property on my MLS has CoreLogic’s automated valuation in the public record field. I will forever hold the opinion that the Zestimate should be invisible or suspended for any active listing, but nobody agrees on everything and that has never undermined our interactions.

So now the news has come out that Rich Barton, the original CEO of the company and someone who was never far from things to begin with is stepping in, and Spencer remains with Zillow. Regardless of the real reasons that people are speculating on, who can say they’ve been at their job since 2004? How many of us have been a CEO since 2010, especially in this industry? People will see what they want to see here, but I can attest from years of firsthand experience that much of the criticism and accusations are the same old bashing with new current events to cast shade upon.

Spencer Rascoff certainly doesn’t need me to vouch for him, and Zillow doesn’t need me to bolster their PR. But my personal experiences over the years are factual, and now is a good time for me to recount them, and to wish Spencer all the best, because he’s as a good a man as it gets.