Honoring the J. Philip Achievers of 2017 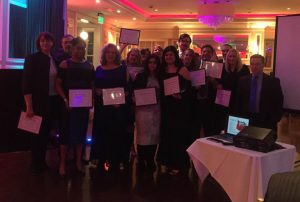 This past Friday, February 9th the firm had its annual award Gala at The Briarcliff Manor to celebrate a successful 2017. We’ve held the event annually since 2015, and the list of award recipients has grown as our collective professional acumen has risen. While I cannot do each of the dozens of recipients justice in one post, I’ll do my best to summarize the highlights of the celebration.

In all, 27 agents were Million Dollar Producers. That is roughly 1/3 of the entire company, and if you are familiar with the 20/80 rule (which is more like the 7/93 rule in our industry), it speaks well of our training and staffing. I can recall a time when we didn’t have 27 agents in the entire company!

5 (five) new agents could have been “Newcomer of the Year” in any other year but this one. I’ve written before about the rookie class of 2017 and it’s similarities to the NFL Draft Class of 1983, and I’m delighted to add that another five agents, but for their timing in joining us, would also be strong candidates. In addition to one Newcomer of the Year, we also recognized 4 additional Newcomers of Distinction.

The award winners are as follows:

In the “coming attractions” part of the dinner, I unveiled the release date of the new company website and back office. The intention to do this was announced at the prior year’s dinner, but we wanted to get it right, and I think we have. Not only will we have a fantastic, consumer-centric website, the agent back office will be a single sign on masterpiece that will have all the tools to manage their businesses under one platform’s umbrella.

I would also be remiss if I didn’t acknowledge that, for as big as our event was this year, the flu kept some very important people home, including Jenn Maher, my commercial and Putnam County partner. As smashing a success as the event was, it would have been more so with Jenn with us and not home nursing her daughter back to health from the flu. Happily, everyone is feeling better now.

I am humbled to be the leader for these many dozens of great professionals who do their jobs so well and build the brand on the foundation of happy, well-served clientele. I eagerly look forward to the rest of 2018 with this team.

Many thanks to Perry and the magnificent staff at The Briarcliff Manor for their dynamite service.